Last year, UZH issued some 90 media releases. Find out which research findings were picked up by the most media outlets in our 2020 top ten. 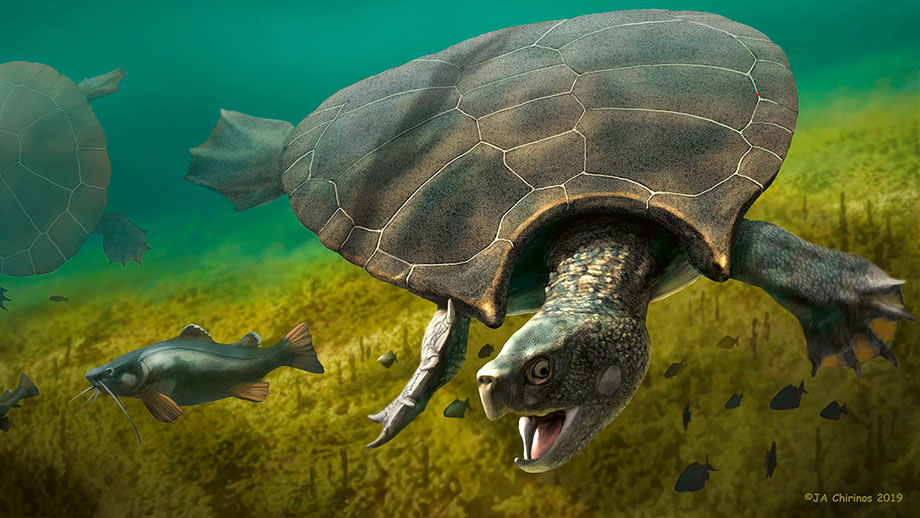 The breadth of topics covered in UZH’s media releases each year is as wide as it is diverse. 2020 was no exception, with topics ranging from Zurich’s links to slavery, industrialist Emil Bührle’s rise as arms manufacturer and art collector, to institutional changes and the latest findings in migraine, trauma, biodiversity and linguistic research. But which media releases made the biggest splash on the international stage? It turns out that research involving animals made for the most successful stories, followed by advances in medicine. We’ve compiled the following top ten most popular media releases based on the number of reports in online and print media:

The clear winner is Stupendemys geographicus, an extinct giant turtle that lived in South America some 8 million years ago. The shells of male Stupendemys grew up to 3 meters long and boasted two front-facing horns, according to the study of UZH paleontologists Marcelo Sánchez and Torsten Scheyer. The findings resulted in 950 articles across the world, predominantly in English- and German-language online media, including CNN, The Guardian, Abu Dhabi News and Süddeutsche Zeitung.

Second place goes to a major breakthrough in transplantation medicine. Using a newly developed perfusion machine, Pierre-Alain Clavien and his team at the UniversityHospital Zurich succeeded in keeping a donor liver alive outside of the human body for a whole week. With more than 50 newspaper reports and online articles as well as a two-minute piece in the Tagesschau, this world premiere was the most successful story in Switzerland. Around the globe, some 640 online media picked up the ground-breaking news, including in Russia, China, Japan and South Africa.

3. Stealthy predator with a looong neck

Another spectacular creature was responsible for the third highest number of articles in 2020 – giraffe-necked Tanystropheus. UZH paleontologist Stephan Spiekman was able to reconstruct its skull in unprecedented detail using CT scanning, showing that it used its small head and long neck to catch prey underwater. The odd creature was covered in over 600 online reports, reaching a potential readership of 3.1 billion people. The news was particularly popular in China, Vietnam, India, Russia and the US.

A study of some 1,000 bottlenose dolphins found that the animals learn new foraging techniques not just from their mothers, but also from their peers. The dolphins thus display cultural behavior that is similar to great apes. With around 500 reports, the study, led by Michael Krützen from the UZH Department of Anthropology, is our no. 4 in 2020 – likely also thanks to the accompanying video. Media outlets that picked up the news included the NZZ and Focus online as well as CNN, The Independent and National Geographic.

A new comprehensive online catalog of almost 14,000 plant species showed that New Guinea is the most floristically diverse island on the planet. The study was successfully plugged to local media outlets by the many involved researchers, including UZH evolutionary biologist Rodrigo Cámara-Leret, and resulted in almost 300 reports. New Guinea’s remarkable biodiversity – 68% of the plants are only found on the world’s second largest island – proved especially popular with German-language online portals.

6. Syphilis can’t be blamed on Columbus

A piece of evolutionary medicine news was reported some 200 times: Verena Schünemann’s study involving DNA samples from human remains suggests that Europeans could already have been infected with syphilis before the 15th century. It was previously believed that Christopher Columbus and his sailors were responsible for bringing the disease to Europe from the New World. The research was of particular interest to Spanish-language and US-based media.

The mounted warriors of Central Asia played ball games to stay in shape well before the Ancient Greeks did so, another popular UZH media release reported. Patrick Wertmann of the Institute of Asian and Oriental Studies investigated 3,000-year-old leather balls discovered in the graves of horse riders in northwest China. The “ballsy” research was reported 28 times in Switzerland and 150 times abroad, reaching a potential readership of one billion people.

A research group headed by quantitative biologist Bernd Bodenmiller developed a method that uses 35 biomarkers to map the cellular landscape in breast cancer in unprecedented detail. This medical breakthrough increases the precision of tumor analysis and improves personalized diagnostics for breast cancer patients. More than 170 (mostly online) articles picked up this news, especially in the US.

We’re not the only ones who can identify rules in complex language-like constructions – monkeys and great apes can too. Comparative linguists Stuart Watson and Simon Townsend used experiments based on an artificial grammar to conclude that this ability can be traced back to our ancient primate ancestors some 40 million years ago. This resulted in around 140 online articles, from Jordan and Australia to Argentina and Canada.

Go on, treat yourself to a break! Motivational psychologist Katharina Bernecker found out that deliberately enjoying short-term pleasurable activities contributes at least as much to a happy life as self-control. People who fully enjoy themselves tend to have a higher sense of well-being and are less likely to suffer from depression and anxiety. This research news reached a potential readership of 1 billion and was covered by Blick and Watson as well as the New York Post and the Daily Mail.