«one earth – many worlds»

The Department of Geography’s motto is “one earth – many worlds.” The Department employs more than 200 staff from approximately 30 countries and offers two degree courses: In geography, currently with about 400 Bachelor’s and 220 Master’s degree students, and in earth system science, with about 60 Bachelor’s and 20 Master’s degree students. UZH’s Department of Geography is home to the World Glacier Monitoring Service (WGMS), which is active in more than 40 countries. 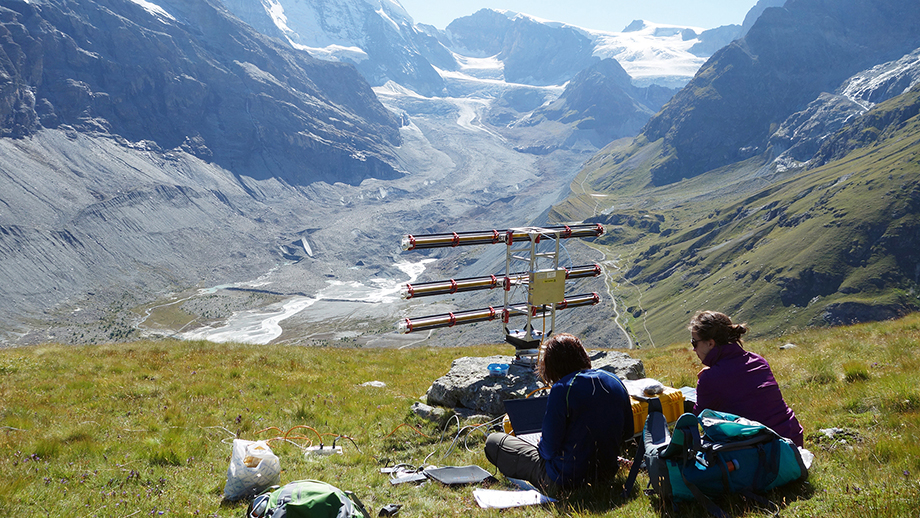 Geographen auf einem Berg
Researchers of the Institute of Geography above the Zmutt Glacier in the Mattertal: They measure the movement of the debris-covered glacier with a radar. (Picture: Andreas Vieli)

The extent to which geography has developed since the beginnings of the department 125 years ago becomes clear when we take a look at its founding father, Otto Stoll. Originally a physician, he established the department when he was appointed the first full professor of geography at UZH in 1895. Stoll had a wide range of interests: he collected zoological material in Guatemala and described Native American tribes. Appointed an associate professor of geography in 1891, Stoll embodies the pioneering age of the discipline, when geographers were primarily chroniclers, describing foreign lands, their bodies of water and mountains, as well as exotic peoples. “Today, geography is a scientific discipline that examines the natural and social processes which define our habitat,” says Jan Seibert, director of Switzerland’s largest department of geography. Or as stated on a board on the Irchel campus: “Geography explores nature and society with the goal of explaining spatial systems and processes.”

The director stresses that modern geography has long since ceased to have anything to do with the old image of “postman’s geography” – in other words, encyclopedic knowledge of countries and cities – adding that geographers nevertheless still have to battle with their antiquated image.

The Department of Geography’s main focuses – globalization, climate change and mobile information technology – reveal just how diverse and above all interdisciplinary modern geography is. “These three clusters contain various subject areas in which we explore highly topical and socially relevant themes,” Seibert explains. One good example is climate change, particularly in connection with increasing urbanization and globalization, and their repercussions. All areas of geography are required for this: agrology, glaciology and hydrology in order to understand natural processes; economic, social and political geography for their social impact; and remote sensing and GIScience for spatial observation, analysis and visualization.

On the subject of globalization, the department head mentions studies on land use in the southern hemisphere, migration, as well as politics and society, which allow geographic, social and political questions to be interlinked. Lastly, information technology encompasses the entire area of geographical information systems and remote sensing.

“I still like holding conventional, analog maps in my hands, but they no longer play much of a role in research,” notes Jan Seibert. “Modern, digital maps or information systems are usually more meaningful, as they include both spatial and chronological data. Remote sensing via satellite makes the broadest variety of analyses possible, ranging from drought in forests to the genetics of vegetation. Remote sensing is extremely integrated and now present in almost all areas of research.”

“What sets the Department of Geography apart is the broad spectrum of research groups and teaching,” remarks Jan Seibert. This is reflected in the specialist knowledge of the department’s members – ranging from mathematics and computer technology to political science. Nowadays, sociology is just as much part of geography as the natural sciences. For this reason, anyone interested in studying geography should also be willing to consider subjects from various perspectives. The broad range of subject matter and young people’s concern for matters of sustainability explain the lively interest students take in the subject. “Geography and earth system science are popular subjects; everyone can find their niche,” Seibert observes. Those who enjoy exploring computer and digital technologies will be just as satisfied as someone wishing to conduct sociological surveys in the southern hemisphere, for example. “However, this thematic breadth does also require people to be tolerant of different ways of exploring and clarifying questions. Conversely, the individual disciplines benefit from the diversity of methods cultivated in the department.”

Fascinated by the element of water

Jan Seibert became a geographer because he is fascinated by water. He took this decision one fine day while walking along the banks of a bubbling stream. “For me, water epitomizes everything that makes geography so exciting: the element itself is fascinating and very versatile,” says the hydrologist, who gained his doctorate in Sweden. He works both theoretically at the computer and practically in the field, and among other things also tackles the modeling of outflows and the cyclical processes of water, particularly under the influence of climate change.

One example of this is the CrowdWater project, in which methods are being developed that will enable volunteers to take hydrological readings using a smartphone app. The objective is to obtain as much data as possible on outflows, soil humidity and water levels. Modern technologies offer interested citizens new opportunities to participate.

With these approaches, the head of the department is putting into practice the variety of methods and themes that distinguish the subject. Launched to celebrate the department’s anniversary, the “125 Jahre GIUZ” (125 Years of GIUZ) blog also offers a diverse range of impressions, and is regularly updated with new articles. It begins with Otto Stoll, the versatile physician and geographer who laid the Department’s foundation stone. And it’s definitely worth a visit.