“It’s pure coincidence that I ended up researching the history of medicine.”

Flurin Condrau is one of the most renowned medical historians in the German-speaking world.

Medical historian Flurin Condrau sees the current crisis as a chance to rethink the role of medicine in society. 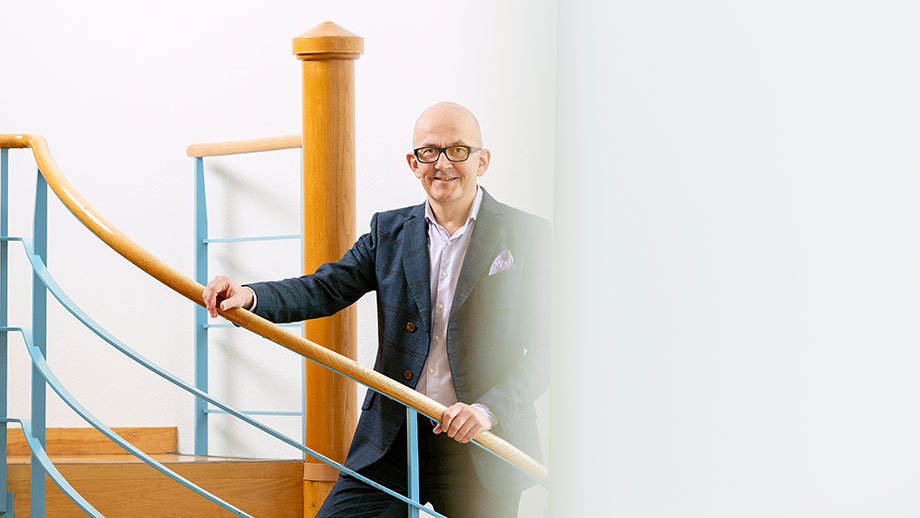 Flurin Condrau is a researcher at the Institute of Biomedical Ethics and History of Medicine at UZH. Born in Zurich with roots in Grisons, he has become one of the most renowned medical historians in the German-speaking world. In theory, he says in our online interview, he could have become an economic historian, or perhaps even a sociologist or historian of the Alps. “It’s pure coincidence that I ended up researching the history of medicine.” In the early nineties, he explains, near the end of his degree in history, sociology and economics at UZH, his professor asked him to attend a guest lecture that had attracted embarrassingly little interest among the Zurich students. Flurin Condrau dutifully went along – and was “immediately captivated” by the questions raised by the German professor in his lecture: How did our current understanding of health and disease develop? What did it mean in earlier times to live a “good life” and die a “good death”? How do we want to live today? And what roles do medicine, the pharmaceutical industry, health policies and the public health system play?

As a young researcher, Condrau was from early on fascinated by the combination of two completely different academic areas: Medicine and history. He wrote his licentiate thesis on cholera in Zurich, and his doctoral thesis on the social history of tuberculosis in Germany and the UK. The history of medicine was at that time almost uncharted territory for historians – at least at German-speaking universities – which also attracted him to the subject. “Until the 1980s, this area of research was the preserve of medics.” However, he quickly also realized what it meant to work in a niche subject which lacked scientific acceptance, institutional integration and visibility. “Little has changed in that regard to this day. Some people in university politics and the medical field still see us as the intermission clowns who provide entertainment at anniversary events. At times of crisis, however, suddenly everyone is interested in what we have to say.” He says this soberly, without bitterness – our conversation took place in December 2020, at the height of the second wave of the coronavirus pandemic. “It’s understandable, people in this extraordinary situation need experts to provide explanations and give them confidence.” Flurin Condrau has been happy to respond to the great media interest in his subject and by extension in him over the last few months. He has appeared in the media to explain why coronavirus can only be compared to a limited extent with earlier infectious diseases such as the plague, cholera and Spanish flu (for example because the values and beliefs of the societies then and now are significantly different). He has stressed how the economies of societies affected by pandemics in the past recovered with astonishing speed (following the severe cholera outbreak in Hamburg in 1892, the city was back to its pre-crisis level just one year later). He has warned against pointing the finger in times of crisis (such as by scapegoating foreigners or partygoers) and he has explained why Switzerland measures up rather poorly in the pandemic stress test (above all because the federal structure makes prognostic, proactive crisis planning much more difficult). When giving interviews during this crisis, Condrau has tried not only to play the aforesaid intermission clown, but to really make productive use of the unusually high level of interest in his field. For example, he wants to show how research into the history of medicine can stimulate critical thinking about fundamental issues. Here he cites issues such as the structure and purpose of current medical activity, the state of the public health system, working conditions in the caring professions, especially for women, and the role of patients in medicine. “Now, a time of crisis, is also the right time to address the problems,” Condrau is convinced. “Covid-19 brings existing social issues to a head and raises new ones.” Now he really gets into his stride: Why is there no broad discussion in Switzerland about health policy issues beyond health insurance rates? And why is no work being done on the sociology of health and illness in this country? As a model in this regard, the historian cites Great Britain, where he worked for several years, first in Sheffield and then at the University of Manchester. “The UK is an important center in Europe for history of medicine research.” With this in mind, Condrau concludes the interview by naming two blind spots within Swiss medical history that he would like to see remedied: The role of the medical device and pharmaceutical industries, and a “serious history of hospitals that understands these important institutions as social, economic and health policy sites.”